incredible images that show the beauty and majesty of the Alps 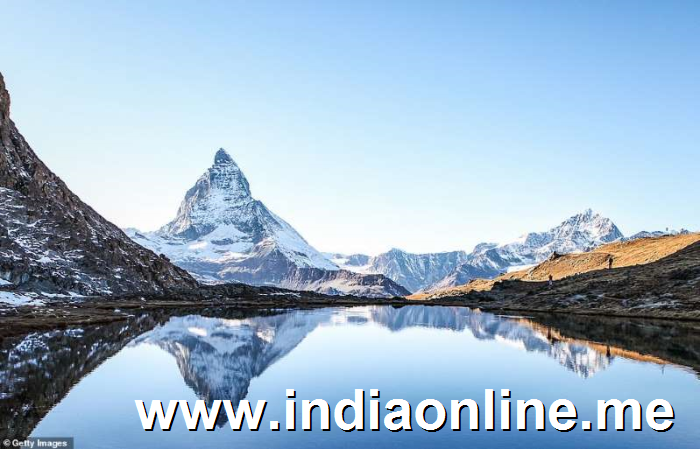 incredible images that show the beauty and majesty of the Alps

Skiing aside, there are myriad reasons to visit the Alps – not least that it is arguably one of the most picturesque environments on Earth.

As this stunning portfolio of pictures shows. 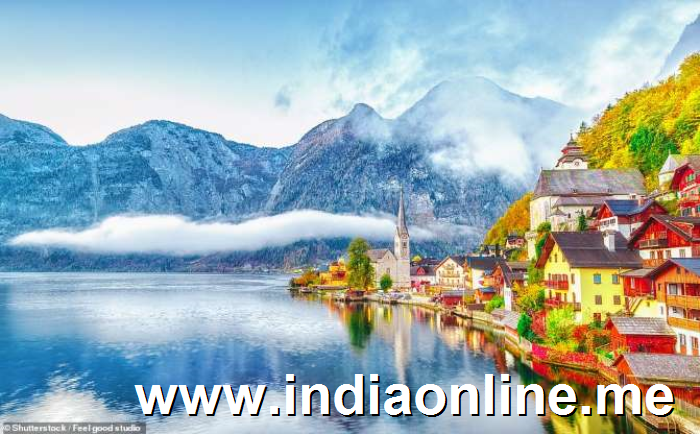 (Hallstatt village, on the banks of Lake Hallstatt, in the Salzkammergut region of Austria, is a Unesco World Heritage site )

Our collection will transport you across the highest and most extensive mountain range system that lies entirely in Europe. One that stretches approximately 750 miles across eight countries: France, Switzerland, Monaco, Italy, Liechtenstein, Austria, Germany, and Slovenia. 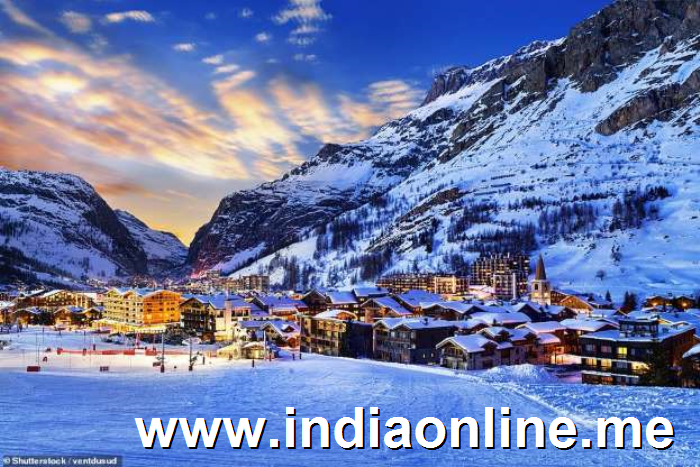 (Val d'Isere in France is one of the Alps' most popular, and glamorous, resorts. Skiers are lured by 186 miles of runs, jaw-dropping off-piste action - and more boutique lodges than you can shake a glass of Krug Champagne at )

Below you can gaze at a mesmerising shot of its highest point, Mont Blanc, which stands 15,781ft above sea level; the 14,692ft-tall Matterhorn on the Swiss-Italian border; the Austrian town of Innsbruck, which has one of the most eye-popping runway approaches in the world, and the picture-postcard-perfect town of Lech, which is festooned with five-star hotels. 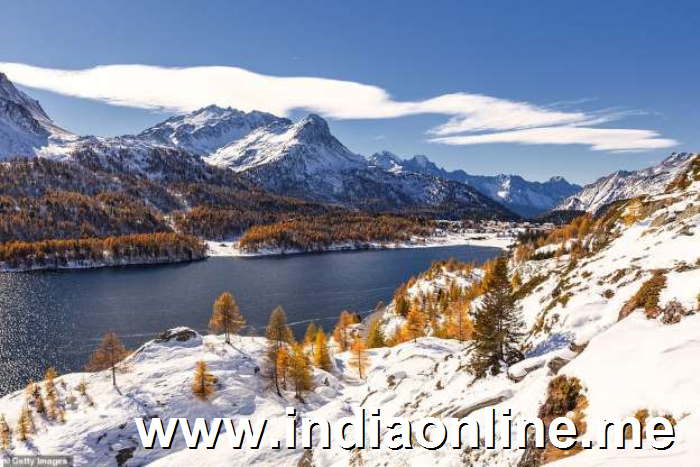 (Golden larch trees are beautifully offset against the snow on the shore of Lake Sils in Maloja, Engadin, in the Swiss canton of Graubünden )

We also have a jaw-dropping image of one of the world's most extreme roads.

Scroll down and it'll become quickly apparent why around 120million visitors descend on the region throughout the year... 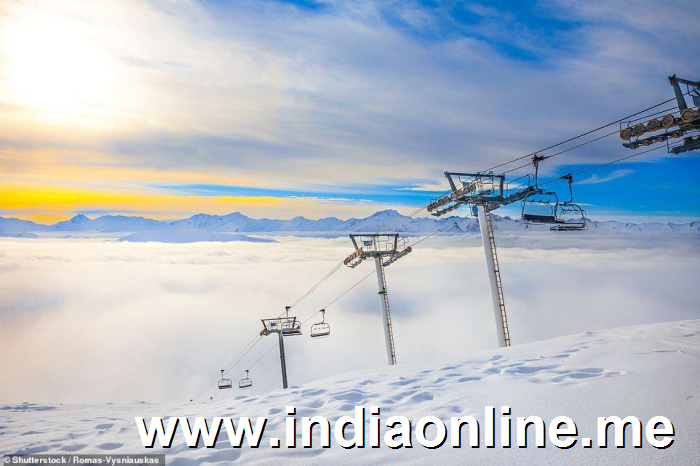 Meribel is a hugely popular resort. This image shows a beautiful sunset there - and one of its chairlift systems disappearing dramatically into a thick wall of cloud 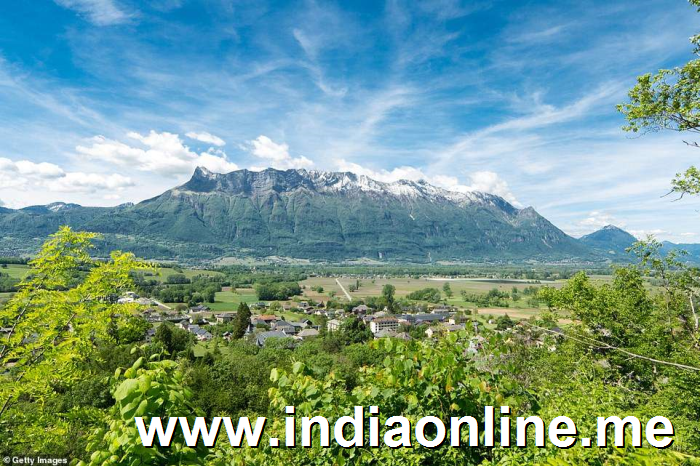 The French Alps is the ideal destination for a whole host of leisure and outdoor activities – skiing, hiking, mountaineering, white water rafting, pot-holing, mountain biking, thermal bathing and much more besides. The picture above was taken near Chambery 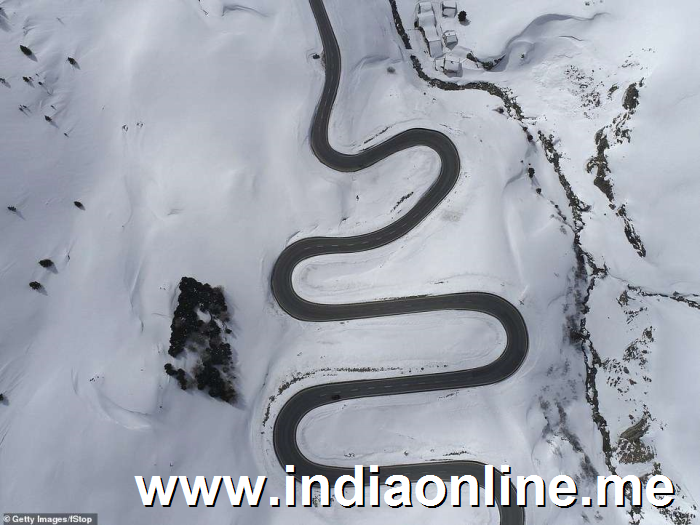 An aerial view of the Julier Pass in St. Moritz, Switzerland, which connects the Engadin valley with the rest of Graubünden 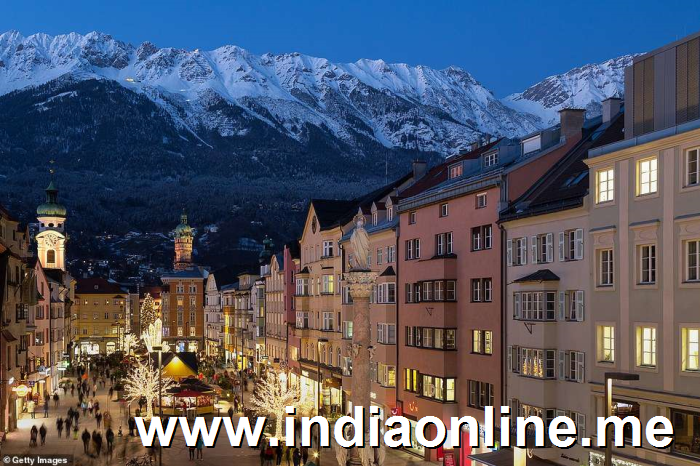 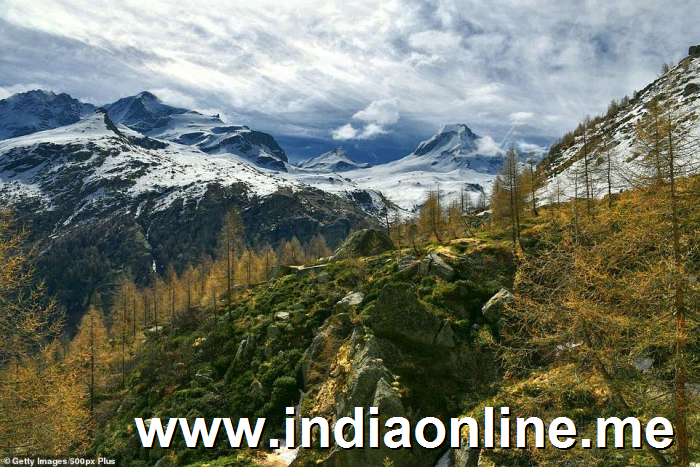 The Gran Paradiso massif, seen here from the Valsavaranche comune, is a mountain in the Graian Alps in Italy, located between the Aosta Valley and Piedmont regions 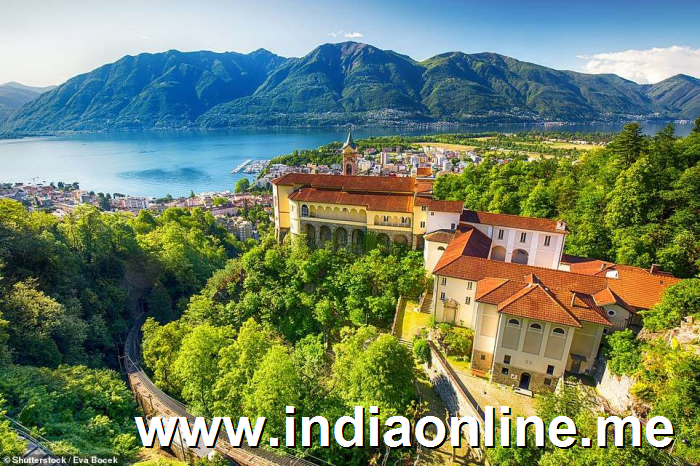 The Madonna del Sasso Church above Locarno city on the shore of Lake Maggiore, Switzerland The Matterhorn, Findelbach Bridge and the Glacier Express pictured at Gornergrat, near Zermatt, in the Swiss Pennine Alps 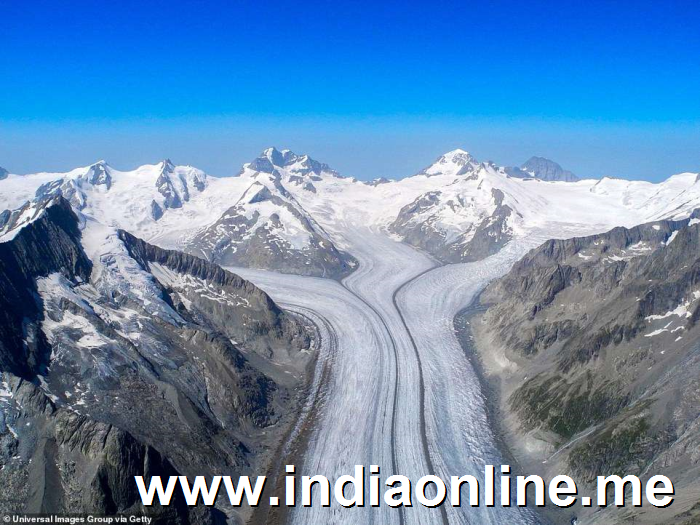 An aerial view of the Great Aletsch Glacier - the largest in the Alps - in the eastern Bernese Alps in the Swiss canton of Valais. It is 23km (14 miles) long 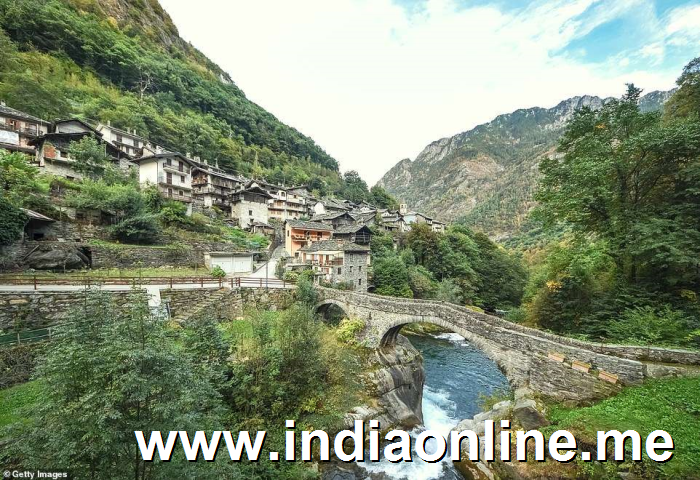 The Alpine town of Pontboset in Valle d'Aosta in northwestern Italy, which has an eye-catching medieval bridge 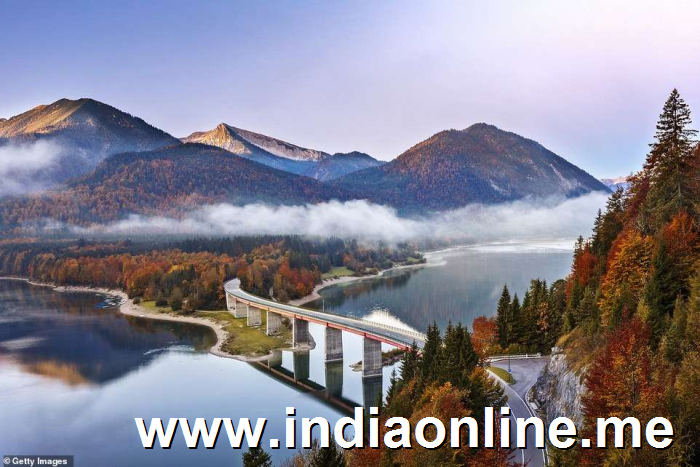 A curved bridge over Lake Sylvenstein in Bavaria, Germany, reflected in the water and framed by colourful autumn foliage 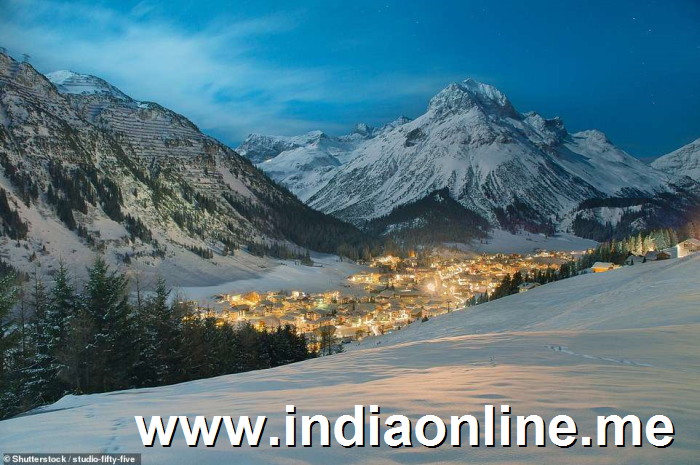 Royal families love the exclusive resort of Lech in Austria, including those from the Netherlands and Jordan. Princess Diana was a big fan too. Among Alpine resorts, you'll only find a higher concentration of five-star hotels in France's Courchevel 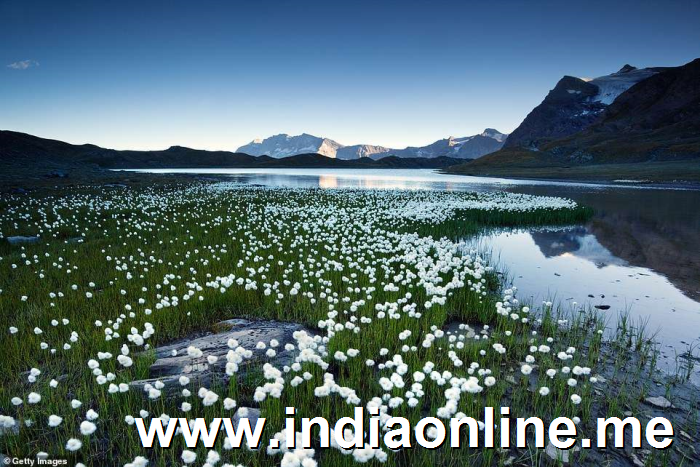 It's easy to see how Parco Nazionale Gran Paradiso, in Piemonte, Italy, got its name. In summertime, the valley is covered in cottongrass 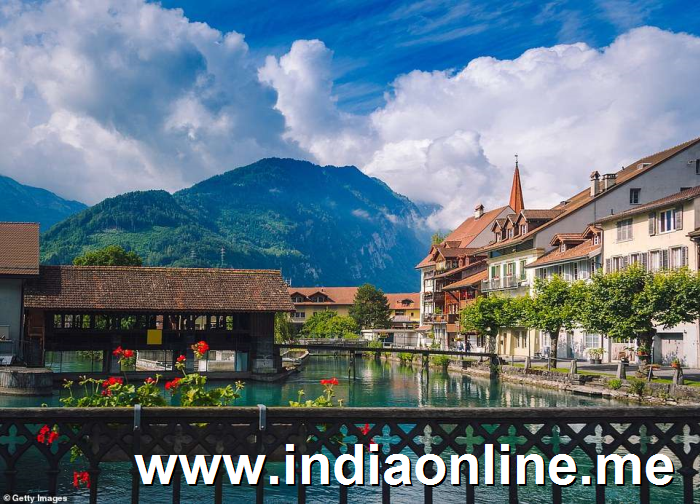 Interlaken is a beautiful little town in the Bernese Oberland region of central Switzerland, between the emerald-coloured waters of Lake Thun and Lake Brienz